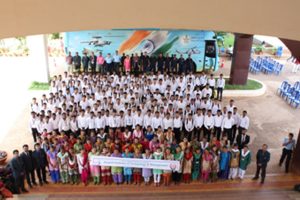 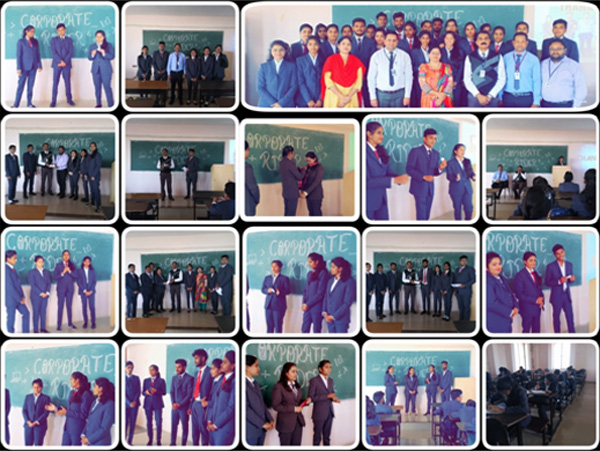 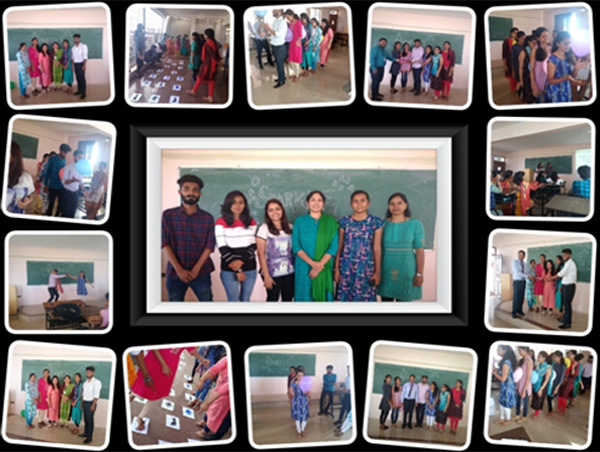 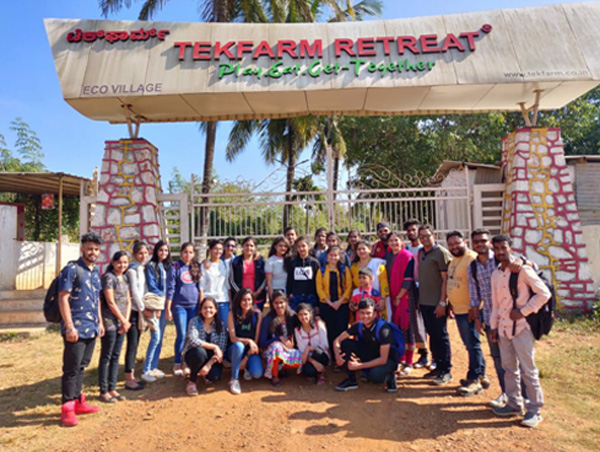 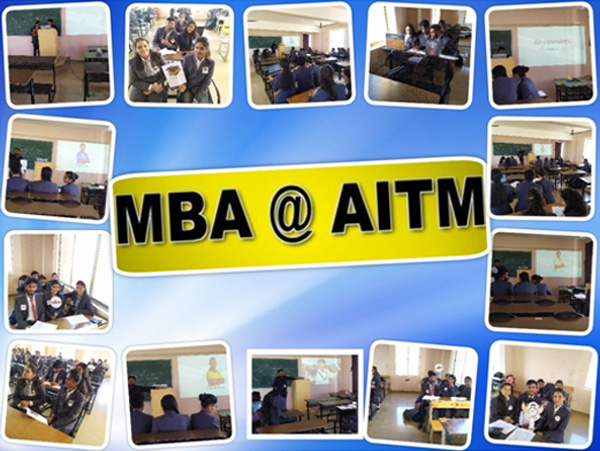 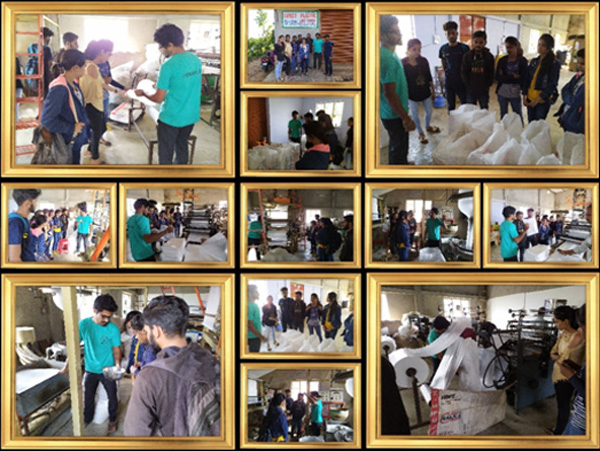 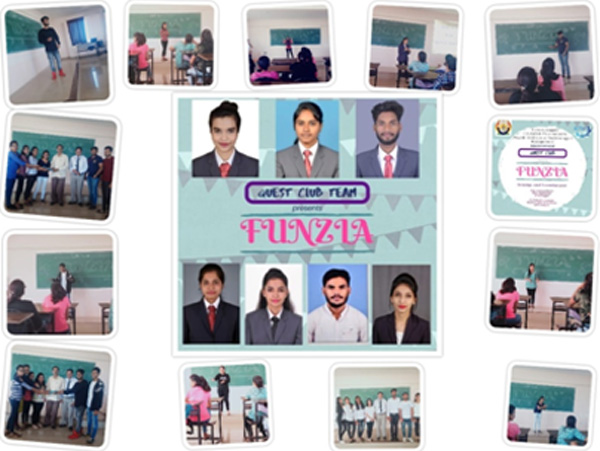 An inter-mentor activity was organised Quest Club, mentor group of Mr. Ajinkya Damle. The students of Quest Club organised an inter – mentor activity which included Quiz, Debate and Enact the movie. There was an active participation from the students. Dr. Rajendra Inamdar awarded the winners and runners up were awarded with prizes and also motivated the students to take active part in upcoming events in MBA Department. A presentation on Time Management was also done by Quest Club team. 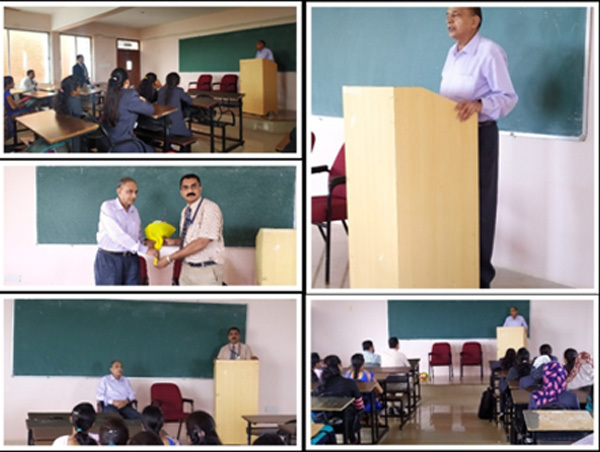 Dr. Rajendra Inamdar, Director, MBA Department welcomed the guest and students of MBA for the session. Dr A B Kalkundrikar, noted Economist shared his thoughts upon the present challenges in Indian economy and also on solutions to overcome those challenges. The students had an interaction with the guest which helped the students to gain insight on the various aspects of economy. 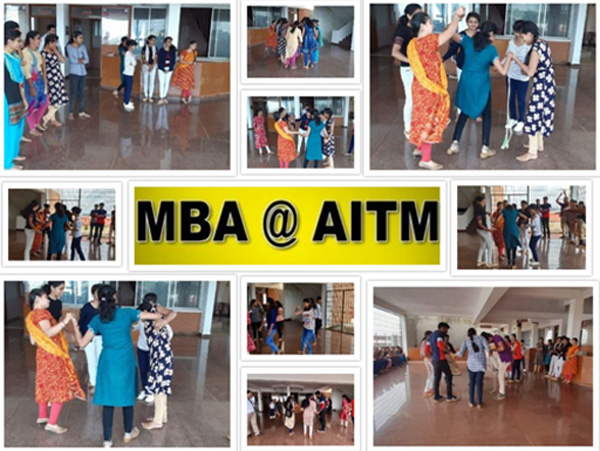 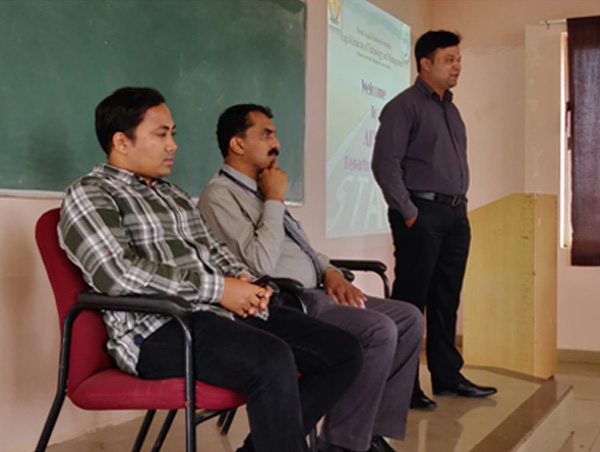 Dr. Rajendra Inamdar, Director, MBA Department welcomed the guest and students of MBA 3rd Semester for the session. Mr Shivkumar Pagad spoke on the importance of projects and internships for MBA students and how it helps to gain practical knowledge and helps in future career. The Guest also spoke on various internship opportunities available for MBA students and how students should choose the internships and surveys based on their area of interest or their preferred sector. Mr. Shivkumar also shared his experience in the field of sales and addressed the students on required set of skills to be successful in the sales field. The guest also addressed the issues in sales field, challenges and how to over the challenges in sales field with proper negotiation skills. Dr. Rajendra Inamdar thanked the guest for guiding the MBA students on importance of internships and projects which will add value to their MBA program.

Dr. Rajendra Inamdar, Director, MBA Department welcomed the guest and students of MBA 3rd Semester for the session. Mr Sumedh Pawar addressed the MBA Students on various challenges in entrepreneurship and also spoke on how to overcome those challenges to become a successful entrepreneur. The guest also stressed on entrepreneur as a career option after completing MBA and also guided the students on various government assistance for entrepreneurs. Mr Sumedh also shared his experience about 3D design models which are used in construction and real estate sector and how technology is changing the face of construction sector and giving fruitful benefits to entrepreneurs and customers. Mr. Sumedh also guided the students on various skills required to become a successful entrepreneur in the present competitive market situations. The students had an interaction with the guest and asked the doubts which were addressed by the guest speaker. Dr. Rajendra Inamdar thanked the guest for sharing his experience with MBA students. 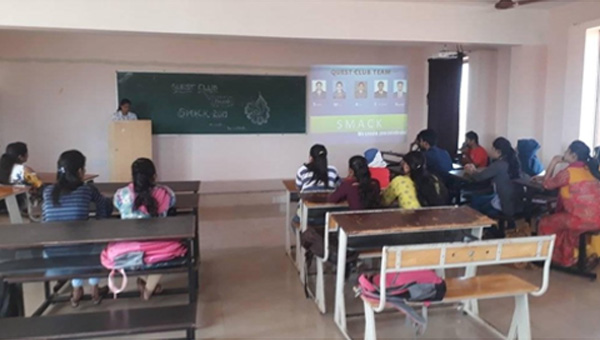 An inter-mentor activity named SMACK, was organised by Prof Ajinkya Damle and his mentor tram. The main idea of the event was to make students participate in various rounds and make them learn things practically. The event had various rounds which included photography, quiz and debate. Ms Sweta Naik and Mr. Kapeel Sawant officially welcomed the staff and students for the event. The students of other mentor groups participated with enthusiasm and the event turned out to be a grand success. Ms Minal was incharge for valedictory function where the winners of quiz, debate and photography were announced who received prizes from the staff members. Dr. Rajendra Inamdar, Director MBA Department shared his thought on the event and said more events of this manner should be conducted to motivate the students. The students from other mentor groups shared their experiences and finally Ms Arati presented vote of thanks to conclude the event. 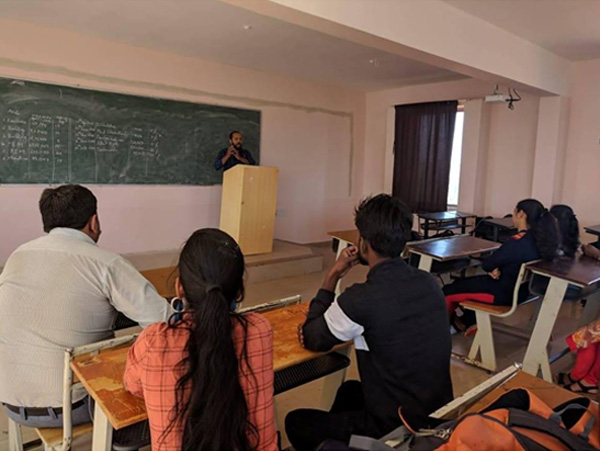 As a part of Alumni interaction, Mr. Maruti Magadum, Financial Analyst, Northern Trust, Pune was invited to deliver a guest lecture on career opportunities in finance. Mr. Maruti Magadum is Alumni of MBA department, passed out in 2018 and has been topper in his batch. H shared his valuable experience and guided the students on what preparations students should do to be successful in the field of finance. He also stressed upon the necessary skills required and the technology involved which helps in moving ahead in corporate life. Mr. Maruti also focused on how the theoretical concepts studied in finance subjects help in answering the question asked in interview. The students also had an interaction with the speaker and were happy to receive answers to their doubts asked. Mr. Maruti also extended his support and agreed upon to give finance projects to MBA students and also train them on various skills required to be successful. 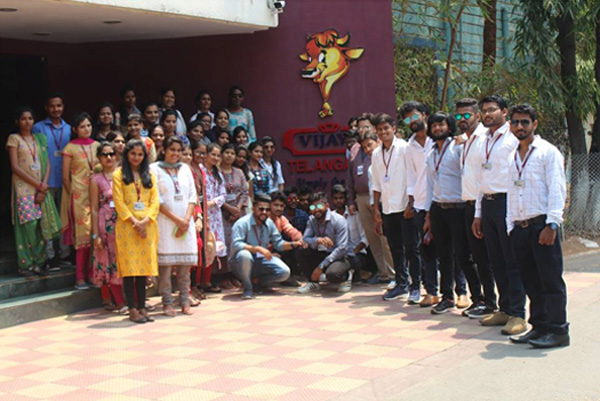 Industrial tour was organised for MBA 4th Sem students at Hyderabad from 25th March to 29th March 2019. Prof Ajinkya Damle and Prof Rekha Birje coordinated the industrial tour. A total of 47 Students and 02 Staff Members went on industrial tour to Hyderabad. The group left Belagavi on 25th March 2019. The industries visited were Vijaykant Dairy Ltd, Manufacturing of Milk Products. The students were shown the process of manufacturing of various milk products. The students also got to know about the different varieties of milk used in milk products. The students also visited Ramoji Film City (entertainment industry) and experienced on the overall management concepts which lead to successful handling of such a big industry spread across such a huge space. The other places visited during the tour were Salarjang Museum, Lumbini Park, Tank Bund, Charminar. The group left from Hyderabad on 28th March 2019 and returned back to Belgaum on 29th March 2019. 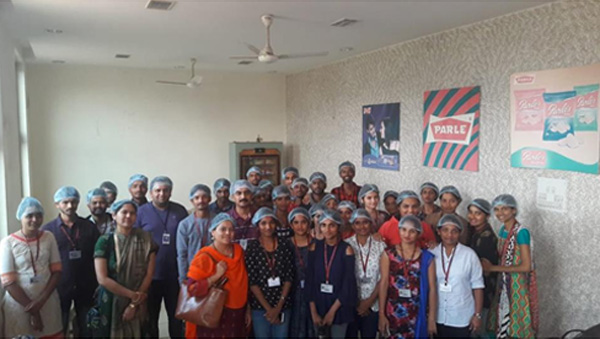 An industrial tour was organised for MBA 3rd Students at Parle-G contract manufacturing plant, Gokul road, Hubli. All the students of MBA 3rd Semester along with staff members of MBA Department visited the plant. Mr Basavaraj Angadi, Manager Parle-G Contract manufacturing plant welcomed the group. An introductory video session on Parle group was shown where all the products of Parle with its history was informed to the students. Later the students visited the plant and observed the manufacturing process of biscuits. Mr. Basavaraj Angadi explained the process right from raw materials to finished product including packing and labelling. The students also had an interaction session with Mr Basavraj Angadi with respect to the manufacturing process and challenges and hurdles that occur and how the same are tackled. MBA Department was thankful to Mr. Basavraj Angadi and all the employees at Parle-G Contract Manufacturing Unit for their kind support in interacting with students and staff. 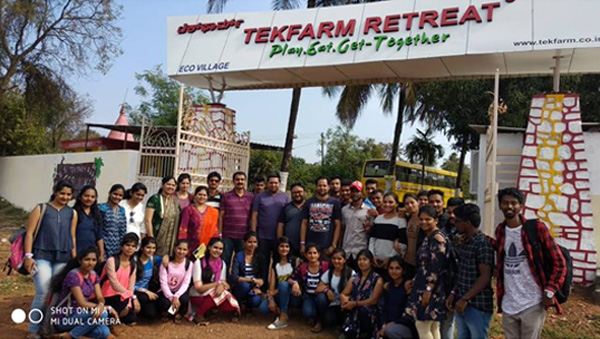 An outbound training was organised for students of MBA 3rd Semester at Tekfarm Retreat, Dharwad. The activity was planned by Dr. Rajendra Inamdar and Prof Ajinkya Damle. The objective of the training was to make students understand the concepts of management like planning, organising, directing, controlling in a practical way. The students were divided in groups and practical tasks were given to students. Training was also given on team building, organising resources, managing time effectively. All the staff members of MBA Department were also involved in activities along with the students to motivate and guide the students. The students were also exposed to village culture lifestyle as the location was situated in an Eco village where all the village life activities were displayed and also students were made to be a part of the lifestyle by making them work towards some activities. The outbound training session proved to be a motivational and refreshing experience for the students. 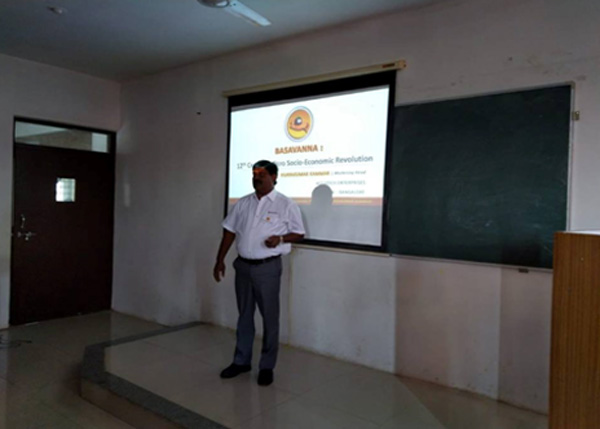 Suresh Angadi Education Foundation’s Angadi Institute of Technology and Management, Master of Business Administration Department organized a guest lecture on on 23-10-2018 at 11.00 am., on the topic of Macro Finance & Micro Socio Economic Model through Basava Philosophy. The resource person was Shri. Vijaykumar Kammar, Marketing Head, AccuTech Enterprises,, Bengaluru. Shri. Vijaykumar Kammar said that Shri Basavanna was a 12th century philosopher, statesman, social reformer and a Kannnada poet who wrote Vachanas and created awaking among masses wrt social equality and dignity of labour. Basava advocated that every human being was equal, irrespective of caste, and that all forms of manual labour were equally important.

Students of AITM MBA got an insight of how a spiritual reform movement also laid the foundation for a resilient micro socio-economic model as people were being valued for their work irrespective of their caste and there was cohesiveness and mutual dependency coupled with harmony in society, through these social reforms, which led to economic upliftment of the downtrodden and masses and increased the trade and commerce of the kingdom which in turn had a positive impact on the macro financial scenario.

The students also learnt about the importance of leading life as a good human being, being practical in life through the Vachanas of Shri. Basaveshwara as narrated and explained by the resource person. 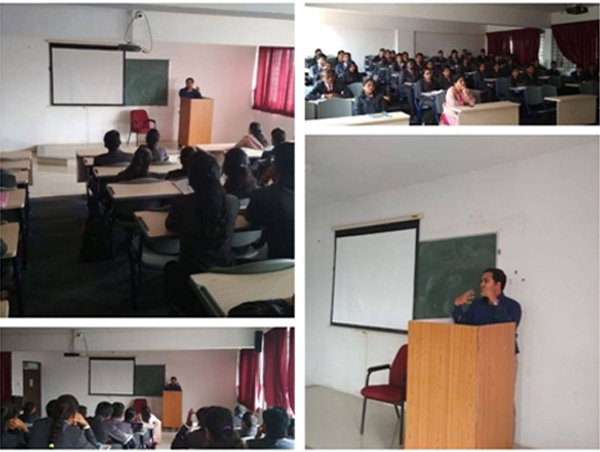 Dr. Rajendra Inamdar, Director, MBA Department welcomed the guest and students of MBA 3rd Semester for the session. Mr. Sumedh is Gold Medalist in International Marketing in MBA programme under KUD in 2011.  The guest took a session on entrepreneur as a career option for MBA Students. Mr. Sumedh shared his ideas on how to be a successful entrepreneur and also the importance of entrepreneurship to our economy. The students were informed on various skills like dedication, innovation, problem-solving, creativity, managerial skills etc which are required to become a successful entrepreneur. The speaker primarily stressed upon risk-taking as the most important entrepreneurial skill and how students must know to analayse the market scenario and calculate the risk involved in decision making. Mr Sumedh also shared his personal experiences of challenges faced in his business and how did he overcome those challenges by using management concepts. Lastly the speaker spoke on various government schemes that provide assistance to start-up and new entrepreneurs. 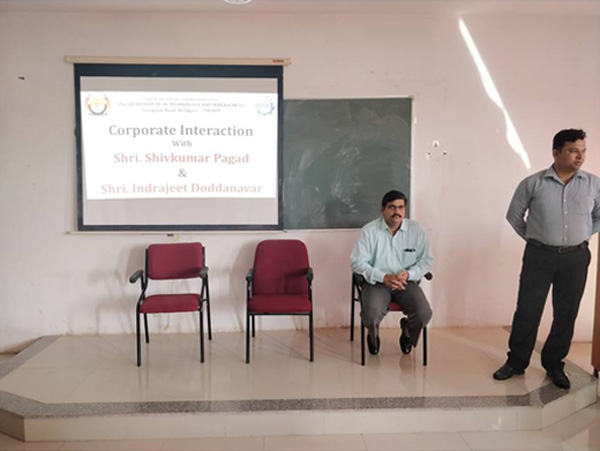 Dr. Rajendra Inamdar, Director, MBA Department welcomed the guest and students of MBA 3rd Semester for the session. The guest guided the students on various career prospects after MBA especially in sales. Mr Shivkumar shared his experiences of sales line job and explained the various career opportunities in the sales and marketing. The guest also spoke on the skills required by candidates to be successful in sales field. The speaker also spoke upon the various challenges faced in sales field and how to overcome those challenges. The session was interactive as students also asked their doubts to the speaker and the speaker was keen on solving the doubts and issues of the students. The speaker also shared his insight on present market competitiveness and how challenging it is to survive in the sales field. The students were also informed various essential sills like communication skills, negotiation skills, team building skills etc which make them successful sales manager. 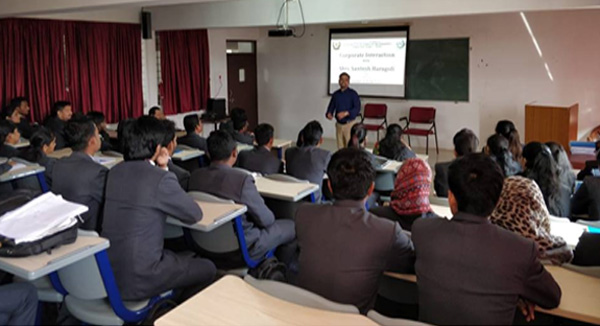 Dr. Rajendra Inamdar, Director, MBA Department welcomed the guest and students of MBA 3rd Semester for the session. Mr Santosh Hargoli conducted a session on effective techniques required for getting selected in interview for MBA 3rd Semester Students. The session included discussion on various opportunities in finance, marketing and human resource management. The students were also given guidance on various recruitment and selection rounds that take place during placements. The students were exposed to all the details pertaining to aptitude test, group discussions and personal interview techniques. Further a mock group discussion and a mock interview session was conducted for the students and later they were guided on how to improve their required skills and showcase their talent in best possible way in the interview. Students were also informed on their dressing style and how to look professional during an interview. Mr. Santosh Hargoli also guided the students on manners and etiquettes to be followed during group discussion and interview sessions.